Are you legally entitled to a bonus? 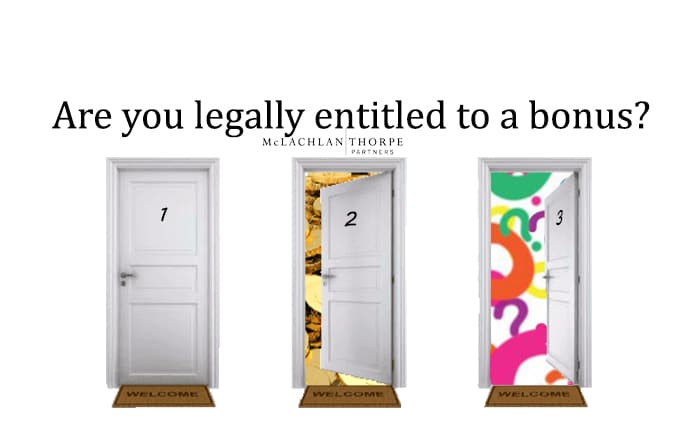 Discretionary Bonuses: Are you legally entitled to a bonus?

Lindley commenced employment with Silverbrook Research Pty Ltd (“Silverbrook”) in 2003. The employment agreement stated that Lindley was eligible to receive an “Annual Performance Bonus” subject to two other clauses. One of those clauses provided that Silverbrook would assess Lindley’s performance against set objectives at the end of each quarter, and provided Lindley’s performance satisfied the set objectives, and subject to the remaining clause, one quarter of the Bonus would be paid to Lindley within 21 days of the end of each quarter. The remaining clause provided that the decision as to whether Lindley should receive the Bonus was entirely within the discretion of Silverbrook.

Upon termination, Silverbrook made an ex-gratia payment of $48,165.13 to Lindley.

In the initial District Court proceedings, it was held that Silverbrook had breached the employment agreement as alleged. This decision was appealed to the NSW Court of Appeal

The Court held that Lindley was likely to have been awarded bonus payments during her time working for Silverbrook, and thus Lindley was entitled to damages for Silverbrook’s failure to set objectives and evaluate Lindley’s performance in accordance with the employment agreement.

The Court awarded Lindley damages in the sum of $80,000.00. The Court ordered that the ex-gratia payment made to Lindley be considered to be part of these damages, and deducted the damages subsequently owed by Silverbrook accordingly.

Loone was employed by Crowe Horwath (Aust) Pty Ltd (“CHA”), an accounting firm, from late 2000 to mid-2016. Loone’s employment agreement provided that Loone may be eligible for a yearly discretionary bonus payment, the amount of which would be determined by consideration of various parameters, including “personal performance, the performance of the Group, and the broader economic conditions.”

From 2014 to 2015, Loone spent in excess of 600 hours negotiating the acquisition of another accounting firm by CHA. This acquisition made CHA a significant profit, and was expected to lead to a marked increase in the bonus pool available for distribution to eligible CHA employees, including Loone.

In June 2016, Loone was advised by CHA executives that the system for bonus payments was to be altered, and as such employees would be receiving 80% of their bonus payment in the relevant bonus year, and the remaining 20% of their payment would be deferred for a period of three years (“the deferral bonus decision”).

In July 2016, Loone was advised that the profits related to the acquisition would be excluded from the calculation of the bonus pool from which Loone was eligible to receive a payment (“the exclusion bonus decision”).

Loone subsequently left CHA, and CHA commenced legal proceedings to enforce post-employment restraints. Loone counter-claimed that CHA had breached the employment agreement, in part due to the deferral and exclusion bonus decisions.

In relation to the deferral bonus decision, the Court stated:

In relation to the exclusion bonus decision, the Court indicated:

The Court, in subsequent further proceedings related specifically to the assessment of damages owed to Loone (Crowe Horwath (Aust) Pty Ltd v Loone (No 3) [2017] VSC 548), awarded Loone the sum of $142,778 in damages, in respect of his bonus entitlement for the year 2015/2016.

Discretionary bonuses are an area of the law that is by no means straightforward, and can be difficult to navigate unassisted.